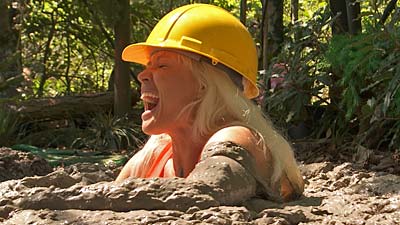 Woman sinking in Quicksand in the forest

Lumberjill Raven is a hard working woman. She is always able to keep up with the men and even got the logger job. While her coworkers are operating the heavy machines, she’s going into the thick forest to do some woodcutter work. After a while it’s time for a short break. So Raven decides to walk back to the logger camp to get some food. “Hmm, but which way to go?”, self-confident as this tough woman is, she thinks she knows the right way, but the further she walks the more quiet becomes the loud logger machines noise in the forest. “I’m lost !!! Where am I ???” And the more she tries to find her way back the further she gets lost in the thick forest. After a few minutes she can’t even hear the loud machines anymore while wandering around alone in the woods.

Suddenly, the ground starts to get muddy and there is no short way around it. Raven wants to find her way back to the camp, so she thinks “I can handle a little mud”. To her surprise she finds out after a small step that this “little” mud sucks her down like sinking in quicksand. First knee-deep, then a few seconds later she is already waist deep in mud. Then she realizes “Oh my god, I’m stuck !!!”. Usually Raven keeps calm, but as an experienced logger she knows all the dangerous stories her coworkers were telling at the campfire evenings at the loggers camp about sinking in quicksand. This forest is really dangerous, they even lost some machines in here. Raven is scared what this mud puddle will do with her if they even lost huge machines sinking in quicksand. “Guys !!!! Somebody ??? Help me !!!” she screams.

She must get out here quickly, don’t waste time, she has to try as hard as possible to get out. All her efforts seem to be useless and she’s even sinking in quicksand deeper and deeper. Raven is desperate but not willing to give herself up. She doesn’t notice that her ongoing struggle is making the situation even worse. She starts sinking deeper in quicksand. It’s a vicious circle but in her panic she isn’t able to calm down anymore.

“No, no, I can’t get lower” fearfully she screams…. but words doesn’t help when sinking in quicksand. “Somebody has to help me” Raven is scared to death when the mud reaches her head …