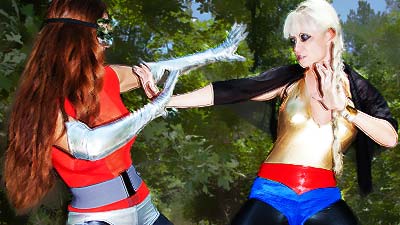 Atomic Red is stranded at a foreign, strange place. It looks like a harmless forest. But she can’t be easily deceived. She can feel the peril in the air. Something quite deadly is waiting here for her. And that is not a good timing at all. She couldn’t fully recover from her last fight and feels still weak. Only thing she remembers, is that with her last burst of energy she could beam herself away. Then she blacked out. And awakened here in this strange forest. Carefully she wanders around. She needs to find a place to rest and something to eat. The only thing keeping her already suffered super powers alive is her mask …

Blonde Bat is on the hunt. Her worst opponent ever, Atomic Red, just slipped from her deadly grip. Damn. She was so close to finish her off once and for all. Her thoroughly planned trap worked so well. Everything went just as she planned it. Totally clueless this stupid Atomic Red fell for it. But then, during her fierce battle, Red could escape. Now she is on the loose again and it can take years and years again to get another chance to catch her. This must be avoided. Now is the time to finish her. She is still weak like a kitten from the last fight! But the luck is in Blondes favor this time. She can feel it! She could trace Atomic Reds escape back to this strange forest. She must be here somewhere!

It must be their fate to finally meet again and finish their last deadly battle. Both feel it. There is no avoiding. The superheroines Atomic Red and Blonde Bat are merely shadows of their former glorious selves. Their last battle lasted already for days and they are both weak. But Blonde Bat is determined to take this now to the end. And there she is: Atomic Red. In the middle of the secluded clearance. Suddenly their eyes meet and lock. “So, we meet again” hisses Atomic Red. “Spare your breath and better fight, bitch” thinks Blonde Bat. And that’s what she does! No mercy. Both superheroines struggle through the bushes, fighting. “I need to get her mask”, thinks Blonde Bat. Only eyes for her opponents mask, she fights and grabs it. Yes, she got it! But not for long, because with her last fierce blow, Atomic Red throws the surprised Bat …

… and she lands right in the middle of a nasty mud hole!

“What place is this?” thinks Blonde Bat while struggling in the grey, thick and gluey mud. This can’t be real. This mud feels tricky and alive somehow … But she has no time to think about it. “Where is my mask?” screams Atomic Red. She is trying to reach it. But it also landed in this mud. Bat can grab her leg and draws her into the mud with her.

And now their real battle begins. While Atomic Red is trying to reach for her mask and Blonde Bat is holding her back, they both sinks down deeper in this alien mud hole. The mud is cold and merciless and sucks them slowly in.

After a while of fighting they realize their situation. They are both so tired and exhausted. It must been the mud. It drains their already damaged super powers even more! Damn it. They are now stuck in this mud. Both. Together. What a shame!

In this power draining mud and without the Magic Mask they are both nothing else than ordinary women. Going down. In this treacherous mud hole.

Both are now struggling to get out of the mud as hard as they can! Moaning and screaming. They are stuck real bad. Full of adrenalin and fear their bodies are trembling. All their efforts seem to be useless and both girls even sink deeper and deeper in this quicksand …

There will be fight, lies, defeat, betrayal, humiliation and lots of dangerous mud … But we won’t spoil the end for you! Watch for yourself! 🙂