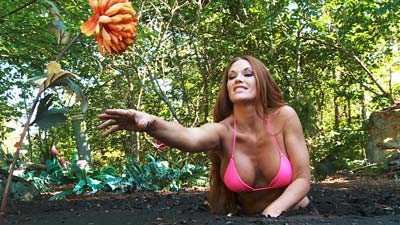 Beautiful Keli needs to relax from her stressful bikini model job. So during a shooting break, she decides to take a relaxing stroll alone through the nearby forest. That’s the best way to get away from the annoying crew. After she walks for a while, she finds a beautiful flower at the edge of a small swamp. “I love that flower” the gorgeous redheaded girl says. Without knowing any danger of getting stuck in peat moss, she carelessly tries to pick it.

“No!” Keli shouts. She quickly sinks in almost knee-deep. First she doesn’t realize she is stuck in peat moss. She tries a little to switch more of her weight onto her other leg, but this attempt also doesn’t look like a good idea. The more she is struggling, the deeper she goes down. Still Keli has no idea what’s going on. Most of her upper legs are already covered with mud. With all her strength she tries to lift up a leg and get it out, but no chance. She just manages to bring it close to the surface, but this effort pushes the other leg way deeper into the mud than before.

Keli is really in big trouble now. Deep to her hips she is stuck in peat moss. Her only chance is to push her body up with her arms. But the heavy mud still keeps her captured. What a mean swamp trap this is. The surface is hard, but not hard enough for Keli to push herself out with her strong arms.

She is a fitness model, in excellent shape. A thing like this can’t stop her. So still full of confidence Keli tries even harder to get out. She struggles and fights and sometimes she is able to lift her upper body a bit out of the mud. But sadly it doesn’t look like that is enough to rescue herself out of this trap.

“I’m stuck!!!” she cries. At this point Keli realizes for the first time that she really has a bad problem now. “I can’t be stuck! Get me out of here” she shouts, still full of power. With a lot of moaning she puts all her strength into her next moves. But her hard efforts are useless.

After long minutes of hard struggling her confidence disappears now. Breast deep stuck in peat moss, even the always strong & powerful Keli loses control about the situation. Out of breaths she realize that she is helpless captured by the swamp. With a tearful voice she says “I can’t get out of here, I can’t get out!” while very slowly sinking deeper and deeper, hopelessly stuck in peat moss…