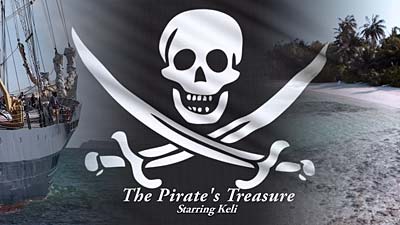 A Pirate woman is sinking in a deep mud puddle

Ahoy! The Buccaneer Captain Keli Morgan commanded her ship to “Mud Island”, telling her crew it is a safe place to stay away from pirate hunters. And the crew always trust their red haired Captain 🙂

After arriving at the island, Captain Keli Morgan sneaks away from her crew with a secret treasure map, she discovered on a former mission. Why share the gold when you can keep it for yourself? So she explores the island….. “X does always marks the spot !!!” And she’s right.

Some hours later she finds the spot where the booty must be. Surprisingly it’s not in a cave. No, it’s in a deep mud puddle, the perfect concealment. “My map will never lie.” Hmm, but how can she get it? Get her crew for help and securely get the treasure? No! As greedy as Captain Keli is, sharing the gold isn’t what she wants to do. She has to retrieve it by herself. No problem for an experienced pirate like her. “The gold will be mine”

So Keli starts digging from the edge of the grey clay pit, but the treasure must be hidden deep in the mud puddle. She must go deeper into the clay to retrieve it.

First she is floating on top of the mud puddle. But while searching for the treasure, she doesn’t realize that she is sinking deeper and deeper. The shine of gold made her forget the danger she brings herself into. “Shiver me timbers!” curses Keli “Considering, I’m stuck” …

“Oh no, I’m sinking!” the strong pirate woman says with fear in her eyes… will this be Captain Kelis last adventure??? Watch the complete “Pirate in distress” video to find out if she can escape from the mud puddle !!!