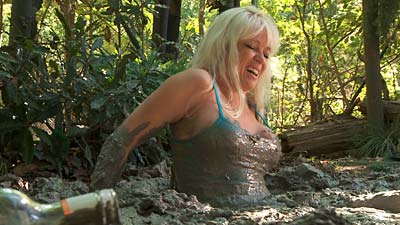 Don’t drink and sink — drunk girl got stuck in mud !!!

What a party it was!!! Raven celebrated New Year’s Eve on a party at a friend’s house. After some dancing and a few drinking games, the spirit is really high and a couple of hours pass. Then at midnight they are all cheering and partying even harder. Happy New Year! They go out in the backyard to see some fireworks, but there is not a lot going on. This part of town is just too secluded and there are not a lot of people living here.

But when the fresh night air hits Raven, she realizes, she doesn’t feel that good. It’s a warm night and it feels good to be outside for a while. She starts strolling away from the house. Well, what happened then, is not really clear, since Raven can’t remember it. She probably passed out somewhere outside and slept for a while.

Now she is awake again. Still pretty drunk. And she finds herself in an area she doesn’t know at all. She is out in a forest, there is no house or civilization to see. But at least she still has the bottle with her, she brought last night. So, well, why not just take another shot? She feels quite tipsy, but determined to find her way back to the friend’s house.

But while stumbling through the bushes, she doesn’t watch her step and ends up in a muddy mess. “Whoops”, Raven wonders “What’s this?” But sinking down until her waist is a funny feeling, and she starts giggling and taking another sip from the bottle. First Raven doesn’t realize that she is stuck in mud. But now, it’s enough, she thinks and throws the bottle a few feet away to have her both hands free, to get out again. Hhhmm, this mud is really heavy. Raven feels suddenly stuck in this mud. “What’s going on?” She struggles to get her legs out of the gluey mud. After a while of trying to lift her body up, her breathing gets louder and faster. This is really exhausting! And actually it looks, like she is getting nowhere. Her position hasn’t changed yet. Raven is stuck in mud very bad.

Raven gets more and more exhausted and desperate. She keeps struggling of course, but without any success. But even drunk, exhausted and stuck in mud, she is a fighter. So keeps on at the verge of crying, but after a while she can actually slowly move out of this mud on her back.

What a relief! Raven directly feels like partying again! Whoohoo!! Very dizzy, she finally gets up and looks for her bottle. Ahhh, here it is. She picks it up and takes another big gulp! Yeah! That’s good. Exactly what she needs right now, because she is stuck in mud so bad. While she actually leans back to drink, she tumbles a bit backwards. Her shoes starts sliding on the still muddy ground and with a big surprise and kind of jump, she lands backwards right in the middle of this concrete-like mudhole again!!!

Well, this was definitely not a good beginning of the New Year for Raven. She is stuck in mud so bad. Will there be a Happy End???