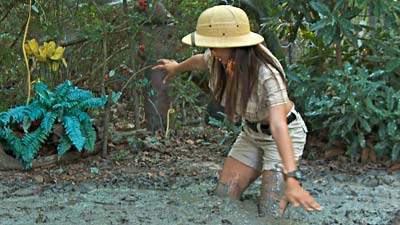 Xena-Kai is a very adventurous Safari Girl. She already journeyed many safaris in the jungle. But this one is different. She lost her complete crew. She is alone now in the jungle with no equipment. This safari girl now has no idea where she even is going. While she wonders around the woods, she encounters a big mud hole. Damn it. There is no way around it. Of course.

Well, then, she who already had challenged so many foreign things, may also conquer a little bit of mud. So, Xena-Kai bravely steps into the mud. Slowly testing the depths of it. The first step is ok. On her second step her leather boot already sinks down deeper. Well, that had to be expected. But of course this mud hole can’t be too deep. So, she keeps on. And with her next step she is right in the middle of it! Slowly sinking deeper. Both her boots are now deep in the mud up to her knee. “Damn it. Now I am stuck!” she cries out with her (not very brave – but too cute) little voice. But of course she is not giving up. She must reach the other site!

While struggling and fighting to move forward, she keeps sinking into the mud. She might have moved forward a bit, but now she is in the mud waist high and again stuck. There is nothing she can hold on to. Nothing to hold her up or to help her get out. Xena Kai is already breathing harder and a bit exhausted. With her usual crew around her, none of this has happened. “I can’t get out of here” she slowly realizes. “Oh, this is so tiring. I need someone to help me” she cries out…